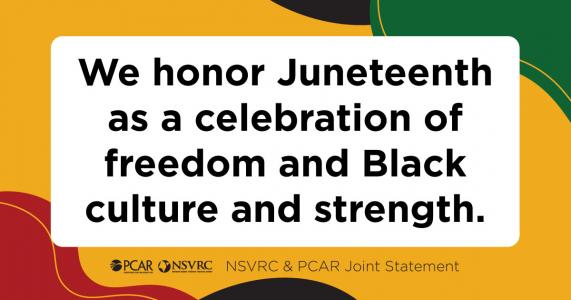 Juneteenth: A Celebration of Freedom and Black Culture and Strength

The Pennsylvania Coalition Against Rape is proud to honor Juneteenth.

Juneteenth recognizes the end to slavery in the United States and is considered the longest-running African American holiday. The day officially became a state holiday in 2019 and a federal holiday on June 17, 2021.

As an anti-violence organization, we know that under the strongholds of inequity, we are still not all free. While slavery has been abolished, power imbalances continue to impact communities of color in our country.

All systems of abuse are interconnected, and systemic racism is no exception. This is why we commit our resources and voices to highlighting the intersections of racial justice with ending sexual assault, harassment, and abuse.

We honor Juneteenth as a celebration of freedom and Black culture and strength. We support the movement to declare Juneteenth a national holiday and a day for healing and advocacy for Black Americans.

PCAR and its staff will honor the day as an office holiday for the first time in 2022. This year Juneteenth falls on Sunday, June 19th. Our offices will be closed in observance the following Monday, June 20.

We encourage rape crisis centers throughout the Commonwealth to explore ways in which you can commemorate this day, if you have not already done so, as a time of healing and an opportunity to learn more about the history and legacy of this holiday.

We also encourage you to take part in Juneteenth events in communities across the Commonwealth as we continue to break down systemic racism and injustice. Below are a few useful resources and some events happening in the Commonwealth in 2022.

The many ways to learn black history

Become involved by participating in an event near you:

Visit Voices Underground, in partnership with the PA Tourism Office, is working to present an array of programs and public events that honor the courage and commitment of residents, past and present, in support of freedom and equality for all. To learn more about its state-wide Juneeteenth Celebration or to submit your own events, visit https://www.vuproject.org/

Other events in the Commonwealth: